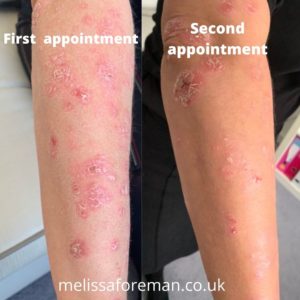 These are photos of a patient who came to see me for treatment for psoriasis and her 2nd appointment four weeks later. The psoriasis had started about five months before, she thinks after being bitten by an insect, possibly a mosquito. I came to the conclusion that she might be suffering from psoriasis caused by a Koebner response. A koebner response is caused by a trigger, such as an injury to your skin, for example a cut, scrape, insect bite or sunburn. The psoriasis was causing her skin to be unbelievably itchy, making her skin to bleed from constant scratching. The psoriasis was forming in circular, scaly patterns all over her body and was beginning to appear on her face and scalp, which was the final straw for her.

In the past couple of months her stress levels had increased due to pressures at work and splitting up with her partner.

She described herself as a naturally happy person but had a tendency to take on too much and not stand up for herself in certain situations. This led to feelings of inadequacy and increased the pressure that she felt under.

I decided to prescribe what homeopaths describe as a constitutional prescription. Where you prescribe on not only the physical symptoms but on the mental and emotional picture too, such as their general mood, how they deal with certain situations in life etc.

Plus general characteristics, such as what they like to eat, how they sleep etc. These are all clues, which when matched to the physical complaint give me the correct remedy for her. In this case it was a remedy called Carcinosin.

I find myself prescribing Carcinosin a lot. It seems to be a remedy for our times. The main emotional picture is of people who over extend themselves, or have feelings of inadequacy and of not being up to a task. They have a fear of failure. They try to be totally perfect and may be very fastidious, or suffer from OCD. They are forgiving of others but not of themselves and tend to give themselves a hard time. They are terrible at standing up for themselves and very sensitive to reprimands. Psoriasis was also listed in the physical symptoms.

On her second appointment she described her psoriasis as being so much better. 50% better in fact and had completely disappeared from her hand, face and scalp. Emotionally she was feeling less stressed, much more cheerful and was beginning to put herself first. She said that when her skin improved, everything began to improve. That’s the beauty of homeopathy. A patient usually comes for one thing and then is amazed as other aspects of their being to improve too.